SSSG is driven by the growth in the average customer check and in customer traffic both of which are affected by changes in pricing and sales mix. On a consolidated basis, during the quarter and year, both the average check and traffic increased when compared to the same periods last year.

Paul Goddard, CEO, Pizza Pizza Limited (“PPL”), said: “Overall, we’re pleased with the performance at our restaurants with Pizza Pizza performing especially well in Ontario.  In Alberta, the decline in the price of oil has put pressure on Pizza 73 sales growth. Geographic diversification has proven to be key in maintaining consistent and stable sales growth. The consistent SSSG over the past four years has allowed the Company to increase dividends six times while also building a $4.9 million working capital reserve.”

The Company’s working capital reserve is $4.9 million at December 31, 2015, compared to $3.9 million at December 31, 2014, which is an increase of $1.0 million for the year. The reserve is available to stabilize dividends and fund other expenditures in the event of short- to medium-term variability in System Sales and, thus, the Company’s royalty income. With this reserve now in place, going forward, the Company will continue to target a payout ratio at or near 100% on an annualized basis. The Company does not have capital expenditure requirements or employees.

Fully-diluted EPS for the quarter was $0.225 per share compared to $0.222 per share for the same quarter in 2014. The period over period increase is attributable to an increase in royalty income and decrease in interest expense. However, instead of EPS, the Company considers “adjusted” EPS[1] to be a more meaningful indicator of the Company’s operating performance and, thus, also presents fully-diluted adjusted EPS. When adjusted for non-cash items, EPS for the quarter increased 0.9% to $0.233 per share compared to adjusted EPS of $0.231 per share in the comparable period last year.

For the year, EPS was $0.821 compared to $0.826 for the prior year. The period over period decrease is attributable to a non-cash expense of $1.25 million related to renewing the Company’s credit facility during the second quarter, offset by an increase in royalty income and decrease in interest expense. When adjusted for non-cash items, EPS for the Year increased 3.9% to $0.895 per share compared to adjusted EPS of $0.861 per share in the prior year.

Of particular note is that the Company’s earnings from operations before income taxes, calculated under International Financial Reporting Standards (“IFRS”), differs significantly from its taxable income, largely due to the tax amortization of the Pizza Pizza and Pizza 73 Rights and Marks. The amount of the tax amortization deducted is based on a declining basis and will decrease yearly.

On March 23, 2015, PPL, the private operating company of the Pizza Pizza and Pizza 73 businesses, entered into an underwriting agreement for the sale by PPL of 2,800,000 common shares of the Company at a price of $15.00 per share. In order to provide the 2,800,000 common shares to the underwriters, PPL exchanged 1,564,889 of its Class B Units of the Pizza Pizza Royalty Limited Partnership (“Partnership”), applying the Class B Exchange Multiplier of 1.789264. PPL’s ownership of the Company’s fully-diluted shares decreased from 29% to 19.9% as a result of the transaction while the Company’s ownership in the Partnership increased from 71% to 80.1%. The total number of fully-diluted shares did not change. All proceeds of the sale were paid to PPL.

Earlier in the year, on April 24, 2015, the Partnership entered into an agreement with its existing syndicate of lenders to significantly improve the terms of its credit facility.

In conjunction with the early renewal of the credit facility, the Partnership terminated its then existing swap agreements and entered into two new interest rate swap agreements that fixed the facility interest rate until April 2020. As a result of terminating the swap agreements, the non-cash, out-of-market loss in comprehensive earnings of $1.2 million associated with the swaps, was reclassified to the statement of earnings.

The lower interest rate on the $47 million facility will result in approximately $640,000 interest savings annually. Projected annual savings per share is $0.021 and the new interest rate was effective April 24, 2015.

The following table sets out selected financial information and other data of the Company and should be read in conjunction with the audited annual consolidated financial statements of the Company.  Readers should note that the 2015 results are not directly comparable to the 2014 results because there are 730 restaurants in the 2015 Royalty Pool compared to 722 restaurants in the 2014 Royalty Pool. 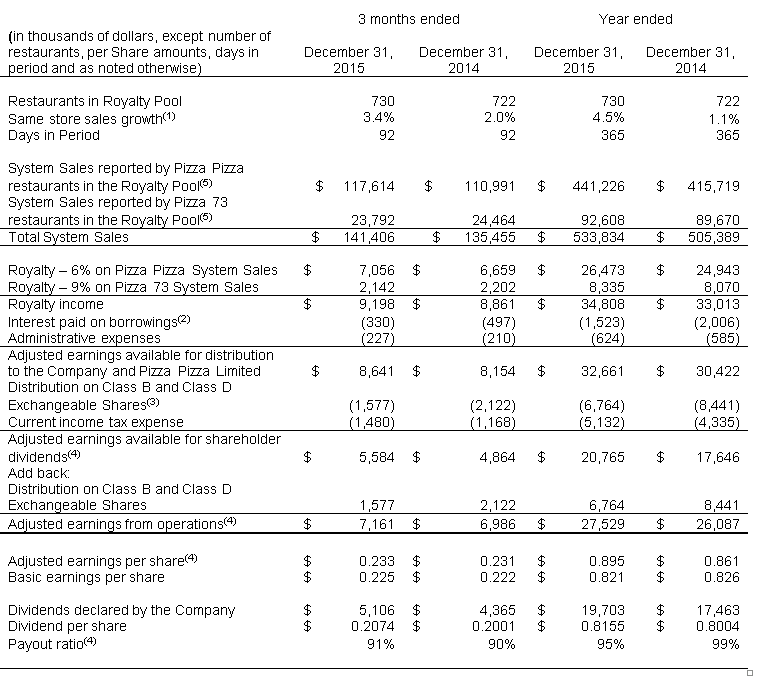 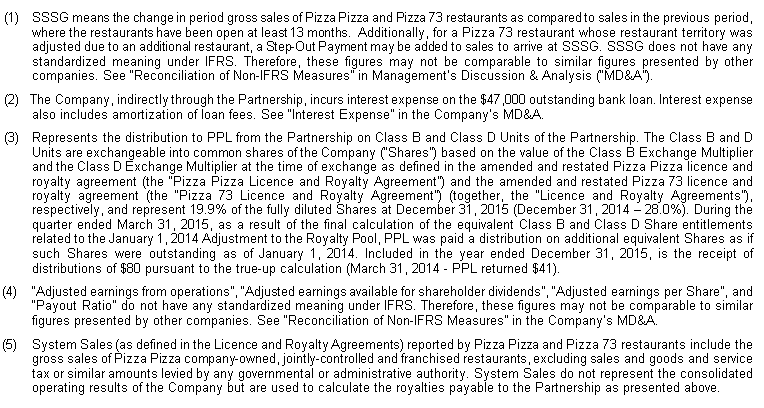 A copy of the Company’s audited consolidated financial statements and related MD&A will be available at www.sedar.com and www.pizzapizza.ca before the market opens on March 7, 2016.

Certain statements in this report, including statements as to expected reductions to interest rate expense and resulting impacts to the Company, may constitute “forward-looking” statements which involve known and unknown risks, uncertainties and other factors which may cause the actual results, performance or achievements to be materially different from any future results, performance or achievements expressed or implied by such forward looking statements. When used in this report, such statements include such words as “may”, “will”, “expect”, “believe”, “plan”, and other similar terminology. These statements reflect management’s current expectations regarding future events and speak only as of the date of this report. These forward-looking statements involve a number of risks and uncertainties, including those described in the Company’s annual information form. The Company assumes no obligation to update these forward looking statements, except as required by applicable securities laws.