Royalty Pool System Sales for the Quarter and the twelve months increased over the prior year comparative periods as a result of the reported same store sales growth (“SSSG”), and the impact of net new restaurants added to the Royalty Pool on January 1, 2016. The full year system sales also benefitted from the extra day in February 2016 due to the leap year, which management estimates the sales to be approximately $1.0 million.

SSSG, the key driver of yield growth for shareholders of the Company, increased by 1.8% (3.4% – 2015) for the Quarter when compared to the same quarter last year and increased by 1.9% (4.5% – 2015) for the year. SSSG is not affected by the additional day during the leap year, as SSSG is calculated using a 13-week comparative basis.

Paul Goddard, CEO, Pizza Pizza Limited, said: “We are pleased with the continued, strong, year-over-year sales growth at our Pizza Pizza restaurants, which account for over 80% of the Company’s royalty pool sales.  Our strong performance at Pizza Pizza more than offsets the results at Pizza 73 in Alberta, where we continue to encounter economic weakness in that energy-dependent economy.”

The reserve is available to stabilize dividends and fund other expenditures in the event of short- to medium-term variability in System Sales and, thus, the Company’s royalty income. With this reserve in place, the Company has set a 2017 targeted payout ratio at or near 100% on an annualized basis. The Company does not have capital expenditure requirements or employees.

Fully-diluted basic EPS for the Quarter was $0.221 per share compared to $0.225 per share for the same quarter in 2015; for the year, EPS was $0.864 compared to $0.821 per share last year. The decrease in EPS for the Quarter is attributable to increased royalty income, offset by higher income tax expense.  For the year, prior year earnings were negatively impacted by the non-cash swap termination costs recognized in April 2015 in the amount of $1.2 million.

As compared to basic EPS, the Company considers “adjusted” EPS to be a more meaningful indicator of the Company’s operating performance and, therefore, presents fully-diluted adjusted EPS. Adjusted EPS for the Quarter decreased 0.9% to $0.231 compared to $0.233 in the same quarter last year, and remained flat for the year. The prior year adjusted earnings benefited from a non-recurring tax deduction in the second quarter last year provided by the “non-cash swap termination costs” mentioned above. The benefit from the tax deduction increased adjusted EPS by $0.0086 in 2015. Without the prior year tax deduction, adjusted EPS for the year ended December 31, 2016, would have increased 1.0% over the prior year.

Current income tax expense for the Quarter was $1.6 million and $5.6 million for the Year. For the 2015 comparative quarter and year, the current tax was $1.5 million and $5.1 million, respectively. The tax expense remained relatively consistent in the Quarter as operating results were comparable. The increase in the tax expense over the prior year is due to the Company’s increased ownership percentage of Pizza Pizza Royalty Limited Partnership (“Partnership”) earnings in the current year, coupled with the fact that the prior year’s taxable income was reduced by the “non-cash swap termination costs” mentioned above. The one-time tax recovery associated with the non-cash swap termination costs in 2015 was approximately $265,000.

The following table sets out selected financial information and other data of the Company and should be read in conjunction with the audited consolidated financial statements of the Company.  Readers should note that the 2016 results are not directly comparable to the 2015 results because of an extra day of royalty revenue in 2016 due to the leap year, in addition to the fact that there are 736 restaurants in the 2016 Royalty Pool compared to 730 restaurants in the 2015 Royalty Pool. 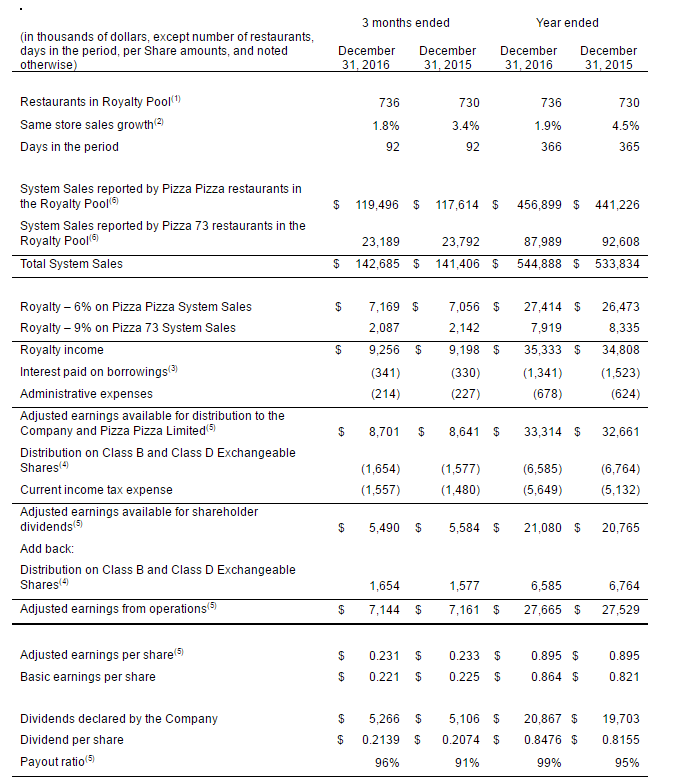 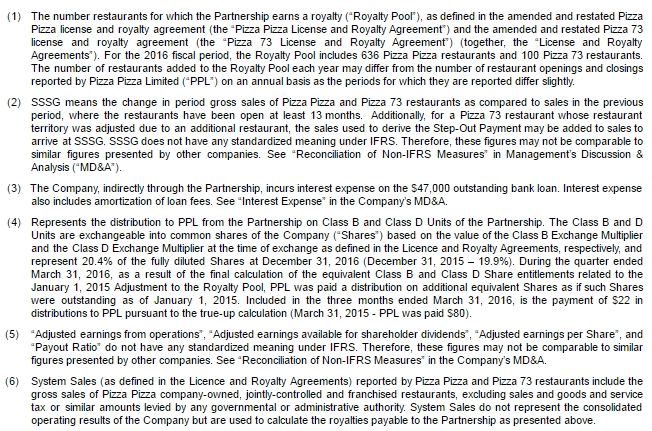 A copy of the Company’s audited consolidated financial statements and related MD&A will be available at www.sedar.com and www.pizzapizza.ca after the market closes on March 8, 2017.