SALES
For the three months ended September 30, 2017 (“Quarter”), System Sales from the 751 restaurants in the Royalty Pool increased 1.6% to $139.0 million from $136.9 million in the prior year comparable quarter when there were 736 restaurants in the Royalty Pool. For the nine month period, Royalty Pool System sales increased 1.3% to $407.4 million from $402.2 million in the same period last year. System Sales in the prior year nine month period included an extra day of sales in February 2016 due to the leap year, which management estimated to be $1.0 million.

Royalty Pool System Sales for the three and nine months increased over the comparative periods in 2016 as a result of the change in same store sales growth (“SSSG”) and the impact of restaurants added to the Royalty Pool on January 1, 2017. Additionally, the extra day of sales in the prior year should be considered when comparing 2017 to 2016.

Paul Goddard, CEO, Pizza Pizza Limited (“PPL”), said: “Our sales were softer than anticipated as a weakened Alberta economy continued to negatively impact sales. At Pizza Pizza, an unusually wet summer resulted in reduced attendance and sales at several, large, outdoor nontraditional venues which offset same store sales growth at our traditional locations. As well, we were up against a strong quarter in 2016 during which the Toronto Blue Jays made it into post-season action.”

SSSG is driven by the growth in the average customer check and in customer traffic, both of which are affected by changes in pricing and sales mix. During the Quarter and for the nine months, PPL continued to execute on its strategy of growing customer traffic through compelling promotional offerings at both brands. The promotions, which were designed to drive traffic at attractive price points, successfully grew both delivery and walk-in traffic when compared to the same periods last year, however the average customer check decreased slightly. Management believes this near-term strategy will stabilize and grow same store sales, especially at the Pizza 73 brand which operates largely in the weakened Alberta economy.

Paul Goddard also added: “Sound fundamentals at our brands have successfully increased customer visits at Pizza Pizza and Pizza 73. Over the past year, the quick service industry has struggled with negative traffic counts in this highly competitive, price sensitive retail environment. We were pleased to reverse the trend at our brands. We will continue this strategy into the final quarter while also positioning marketing campaigns to grow the average customer check during what appears to be a promising hockey season.”

In the quarter, the Company declared shareholder dividends of $5.3 million, or $0.2139 per Share, which is unchanged from the prior year comparable quarter. The payout ratio was 101% for the Quarter and was 97% in the prior year quarter.

The Company’s working capital reserve is $4.8 million at September 30, 2017, which is a decrease of $374,000 since December 31, 2016. The decrease in the reserve was the result of relatively flat adjusted earnings, coupled with an increase in the dividend effective June 2016.

With this reserve in place, the Company has set a 2017 targeted payout ratio at or near 100% on an annualized basis.

The reserve is available to stabilize dividends and fund other expenditures in the event of short- to medium term variability in System Sales and, thus, the Company’s royalty income. The Company does not have capital expenditure requirements or employees.

Fully-diluted basic EPS for the Quarter decreased 2.4% to $0.216 per share compared to $0.221 per share for the same quarter in 2016. For the nine month period, the basic EPS was flat at $0.644 per share and is attributable to an increase in royalty income offset by an increase in current taxes.

As compared to basic EPS, the Company considers “adjusted” EPS1 to be a more meaningful indicator of the Company’s operating performance and, therefore, presents fully-diluted adjusted EPS. Adjusted EPS for the Quarter decreased 2.6% to $0.223 when compared to the same period of 2016, and decreased 0.4% for the nine month period.

Current income tax expense for the Quarter was $1.5 million and $4.2 million for the nine month period. For the 2016 comparable quarter and period, the current tax was $1.3 million and $4.1 million, respectively. The tax expense increased in both periods due to an increase in royalty income plus the fact that the available tax amortization on undepreciated capital assets decreased for the period.

The following table sets out selected financial information and other data of the Company and should be read in conjunction with the unaudited interim condensed consolidated financial statements of the Company. Readers should note that the 2017 results are not directly comparable to the 2016 results because of an extra day of royalty revenue in 2016 due to the leap year, in addition to the fact that there are 751 restaurants in the 2017 Royalty Pool compared to 736 restaurants in the 2016 Royalty Pool. 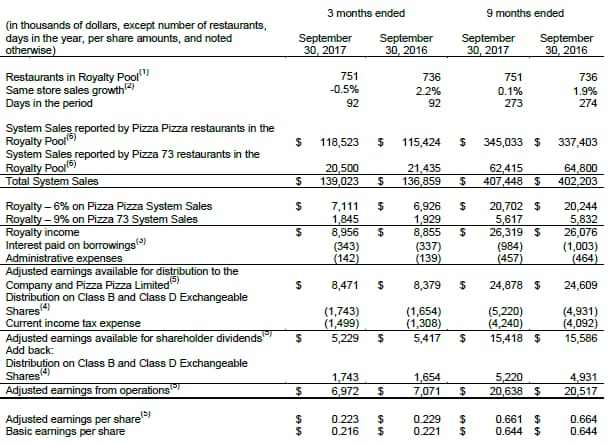 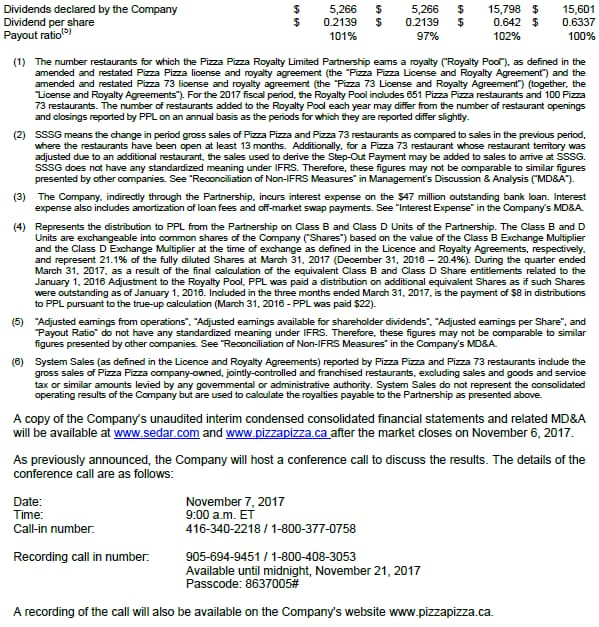