Royalty Pool System Sales for the three months and year increased over the comparative periods in 2016 as a result of the change in same store sales growth (“SSSG”) and the impact of restaurants added to the Royalty Pool on January 1, 2017. Additionally, System Sales in 2016 included an extra day of sales in February 2016 due to the leap year, which management estimated to be $1.0 million. The extra day of sales in the prior year should be considered when comparing 2017 aggregate System Sales to 2016.

SSSG is driven by the change in the customer check and customer traffic, both of which are affected by changes in pricing and sales mix. During the Quarter the average customer check increased when the two brands are combined, while the customer traffic counts decreased slightly. For the year, the average customer check decreased slightly, while traffic increased; the traffic increase is due to Pizza Pizza activity, operating largely in eastern Canada, and accounting for over 80% of total sales. The decrease in the average check was the result of Pizza Pizza marketing campaigns rolling back prices during its 50th anniversary celebrations. The Pizza 73 traffic counts continue to be negatively impacted by the weakened Alberta economy, resulting in negative SSSG.

Paul Goddard, C.E.O., Pizza Pizza Limited, said: “The Pizza 73 brand, operating in western Canada, continues to be negatively impacted by the weakened Alberta economy, however, the brand’s market-leading strength produced eight restaurant openings in 2017, expanding further into new markets. At both our brands, as many provinces increase the minimum wage, 2018 marketing strategies will be structured to guard restaurant profitability while also driving customer traffic to our restaurants and also to our wide array of digital ordering platforms.”

MONTHLY DIVIDENDS AND WORKING CAPITAL RESERVE
In the Quarter, the Company declared shareholder dividends of $5.3 million, or $0.2139 per Share, which is unchanged from the prior year comparable quarter. The payout ratio was 95% for the Quarter and was 96% in the same quarter last year.

The reserve is available to stabilize dividends and fund other expenditures in the event of short- to medium term variability in System Sales and, thus, the Company’s royalty income. The Company does not have capital expenditure requirements or employees.

As compared to basic EPS, the Company considers “adjusted” EPS1 to be a more meaningful indicator of the Company’s operating performance and, therefore, presents fully-diluted adjusted EPS. Adjusted EPS for the Quarter increased 0.7% to $0.233 when compared to the same period of 2016, and decreased 0.1% to $0.894 for the year compared to 2016.

CURRENT INCOME TAX EXPENSE
Current income tax expense for the Quarter was $1.5 million and $5.8 million for the year. For the 2016 comparable quarter and annual period, the current tax was $1.6 million and $5.6 million, respectively. The tax expense increased in 2017 due to an increase in royalty income plus the fact that the available tax amortization on undepreciated capital assets decreased for the period.

SELECTED FINANCIAL HIGHLIGHTS
The following table sets out selected financial information and other data of the Company and should be read in conjunction with the consolidated financial statements of the Company. Readers should note that the 2017 results are not directly comparable to the 2016 results because of an extra day of royalty revenue in 2016 due to the leap year, in addition to the fact that there are 751 restaurants in the 2017 Royalty Pool compared to 736 restaurants in the 2016 Royalty Pool. 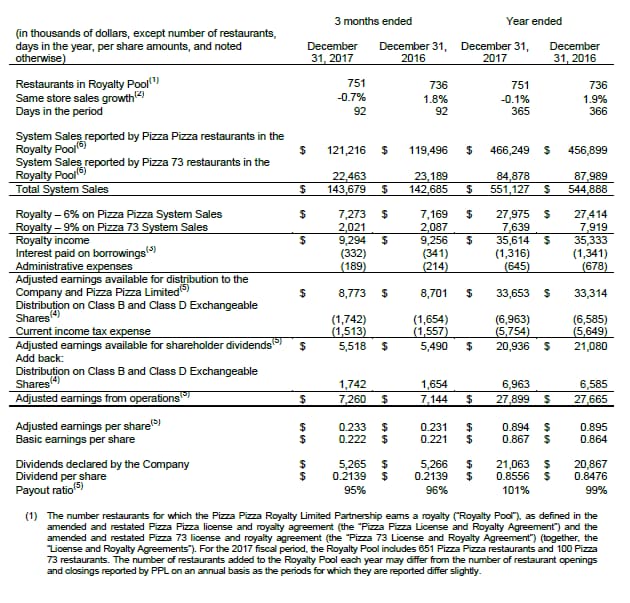 A copy of the Company’s audited consolidated financial statements and related MD&A will be available at www.sedar.com and www.pizzapizza.ca after the market closes on February 28, 2018.