Total Royalty Pool System Sales for the Quarter increased over the comparative period as a result of the reported increase in same store sales growth (“SSSG”) and the new restaurants added to the Royalty Pool on January 1, 2019.

MONTHLY DIVIDENDS AND WORKING CAPITAL RESERVE
In the Quarter, the Company declared shareholder dividends of $5.3 million, or $0.2139 per Share, which is unchanged from the prior year comparable quarter.  The payout ratio was 107% for the Quarter and was 110% in the comparative quarter last year.

The Company’s working capital reserve is $3.5 million at June 30, 2019, which is a decrease of $732,000 since December 31, 2018. The decrease in the reserve is largely attributable to the 107% payout ratio for the first six months of the year when system sales are historically weaker than the second half of the year due to seasonality in restaurant sales.

As compared to basic EPS, the Company considers “adjusted” EPS[1] to be a more meaningful indicator of the Company’s operating performance and, therefore, presents fully-diluted adjusted EPS. Adjusted EPS for the Quarter increased 2.1% to $0.214 when compared to the same period in 2018, and increased 0.5% for the first six months.

CREDIT FACILITY
On June 28, 2019, the Pizza Pizza Royalty Limited Partnership amended and extended its $47 million credit facility with a syndicate of chartered banks from April 2020 to April 2025.  The current interest rate, which began April 24, 2015 and is projected to remain unchanged through April 2020, is 2.75%, and is comprised of a portion fixed with swaps of 1.875% plus the credit spread, currently set at 0.875%. Additionally, the Company’s subsidiary entered into a five year forward swap arrangement, commencing April 2020. Beginning on that date, the credit facility will have a new, effective interest rate of 2.685% comprised of a fixed rate of 1.81% plus a credit spread, currently at 0.875%. 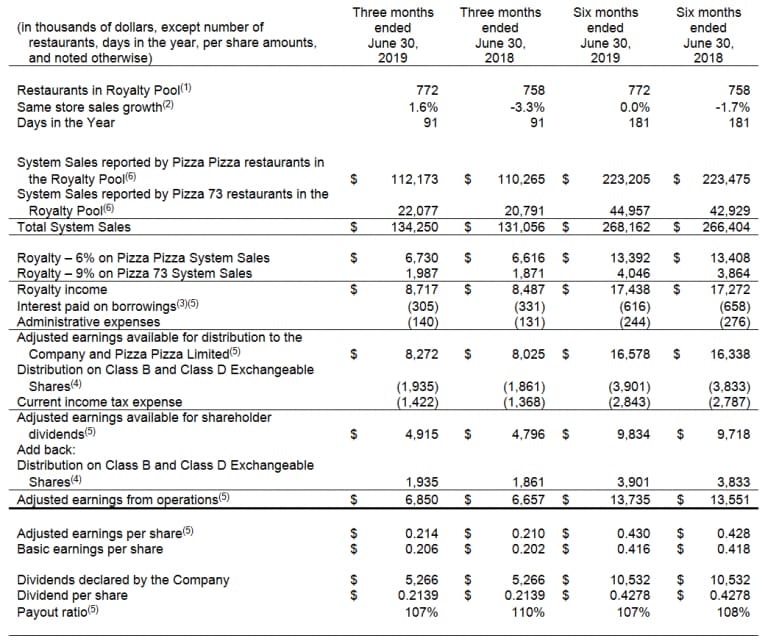 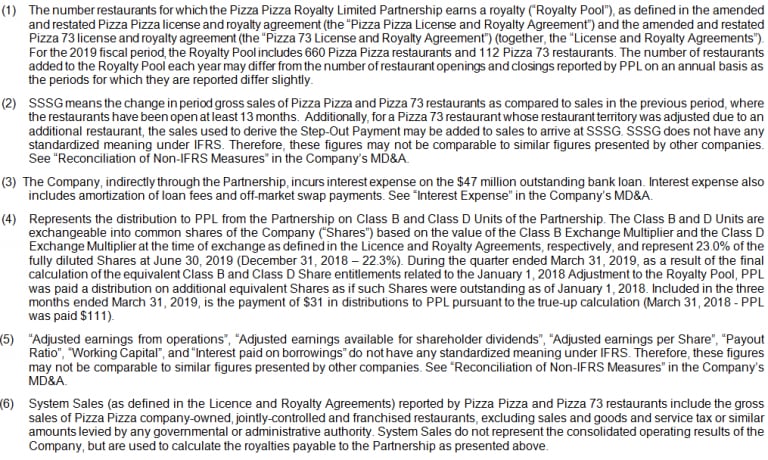 SELECTED FINANCIAL HIGHLIGHTS
The following table sets out selected financial information and other data of the Company and should be read in conjunction with the consolidated financial statements of the Company. Readers should note that the 2019 results are not directly comparable to the 2018 results because of the fact that there are 772 restaurants in the 2019 Royalty Pool compared to 758 restaurants in the 2018 Royalty Pool.

A copy of the Company’s interim condensed consolidated financial statements and related MD&A will be available at www.sedar.com and www.pizzapizza.ca after the market closes on August 7, 2019

Forward Looking Statements
Certain statements in this report may constitute “forward-looking” statements which involve known and unknown risks, uncertainties and other factors which may cause the actual results, performance or achievements to be materially different from any future results, performance or achievements expressed or implied by such forward looking statements. When used in this report, such statements include such words as “may”, “will”, “expect”, “believe”, “plan”, and other similar terminology. These statements reflect management’s current expectations regarding future events and speak only as of the date of this report. These forward-looking statements involve a number of risks and uncertainties, including those described in the Company’s annual information form. The Company assumes no obligation to update these forward looking statements, except as required by applicable securities laws.