By Raymond lukNovember 6, 2019 No Comments

Total Royalty Pool System Sales for the Quarter and nine month period reflect the impact of the reported same store sales growth (“SSSG”) and the new restaurants added to the Royalty Pool on January 1, 2019.  SSSG, the key driver of yield growth for shareholders of the Company, decreased by 0.1% for the Quarter compared to the same quarter last year. Year-to-date, SSSG was flat when compared to the same period in
2018.

Paul Goddard, CEO, Pizza Pizza Limited said, “We are pleased to see Pizza 73 continue posting positive same store sales growth in western Canada and are encouraged by our recent momentum at Pizza Pizza in winning back customers and recovering traffic in the highly competitive Ontario market. Our market-leading brands, marketing power and new innovations in our technology and menu offerings are gaining traction and we expect these to continue providing major advantages over competitors in the pizza industry.”

MONTHLY DIVIDENDS AND WORKING CAPITAL RESERVE
In the Quarter, the Company declared shareholder dividends of $5.3 million, or $0.2139 per Share, which is unchanged from the prior year comparable quarter.  The payout ratio was 103% for the Quarter and 102% the comparative quarter last year.

The Company’s working capital reserve is $3.3 million at September 30, 2019, which is a decrease of $870,000 since December 31, 2018. With this reserve in place, the Company has targeted an annual payout ratio at or near 100% on an annualized basis; however, the ratio may exceed 100% in 2019 due to the reported SSSG. The Company’s fourth quarter Royalty Pool System Sales have historically been the strongest quarter which has resulted in the fourth quarter payout ratio being less than 100%.

As compared to basic EPS, the Company considers “adjusted” EPS to be a more meaningful indicator of the Company’s operating performance and, therefore, presents fully-diluted adjusted EPS. Adjusted EPS for the Quarter decreased 0.5% to $0.221 when compared to the same period in 2018, and increased 0.2% for the nine months.

On June 28, 2019, the Partnership amended and extended its $47 million credit facility with a syndicate of chartered banks from April 2020 to April 2025.  The Partnership’s current interest rate is 2.75% and is projected to remain unchanged through April 2020 (2018 – 2.75%). The effective rate is comprised of a portion fixed with two interest rate swaps at 1.875% plus the credit spread, currently set at 0.875%. In the third quarter, the Partnership entered into a five year forward swap arrangement, commencing April 2020, at which time the credit facility will have a new, effective interest rate of 2.685% comprised of a fixed rate of 1.81% plus a credit spread, currently at 0.875%.

With an enhanced focus on restaurant level profitability across the entire national network of locations, management has recently undertaken a review of underperforming restaurants and now projects closing four traditional and eight nontraditional locations in the fourth quarter which, when added to the closures through nine months, will exceed openings for the full year. We project opening eight traditional and two nontraditional restaurants in the fourth quarter. Management anticipates returning to overall net positive store growth for 2020 at both brands.

When PPL reports closed restaurants, an amount reflecting the reduction in the Royalty resulting from the decrease in System Sales will be paid by PPL to the Partnership, monthly, (the “Make-Whole Payment”), commencing from the date of permanent closure of a restaurant and paid until the following Adjustment Date (January 1). On the subsequent Adjustment Date, the calculated lost System Sales from the closed restaurants will be offset against forecasted System Sales of the new restaurants added to the Royalty Pool. The details of the full calculation can be found in the Company’s Annual Information Form.

The following table sets out selected financial information and other data of the Company and should be read in conjunction with the consolidated financial statements of the Company. Readers should note that the 2019 results are not directly comparable to the 2018 results because of the fact that there are 772 restaurants in the 2019 Royalty Pool compared to 758 restaurants in the 2018 Royalty Pool. 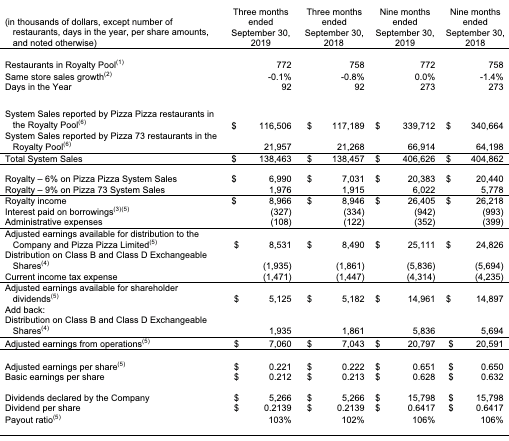 A copy of the Company’s interim condensed consolidated financial statements and related MD&A will be available at www.sedar.com and www.pizzapizza.ca after the market closes on November 6, 2019