Royalty Pool System Sales for the Quarter and year increased over the comparative periods as a result of the reported increase in same store sales growth (“SSSG”) and the impact of net, new restaurants added to the Royalty Pool on January 1, 2019.

SSSG, the key driver of yield growth for shareholders of the Company, increased by 2.0% for the quarter compared to the same quarter last year, and increased 0.5% for the year compared to 2018.

Paul Goddard, CEO, Pizza Pizza Limited said, “We are pleased with the sales growth at both brands in this highly competitive environment.  Our successes are attributable to this quarter’s on-trend product introductions, restaurant operational excellence and our full relaunch of Pizza Pizza’s website and apps. The “Gourmet Thins” pizzas launched at Pizza Pizza and the Cauliflower pizza crust at both Pizza 73 and Pizza Pizza, showcased our brands’ continuous innovation and quality focus to meet customers’ evolving preferences, while always delivering excellent value for money. Additionally, our “Delivery Done Better” promise, designed to increase delivery traffic, is proving to be a major competitive advantage for our brands and is clearly delighting our customers.”

In the Quarter, the Company declared shareholder dividends of $5.3 million, or $0.2139 per Share, which is unchanged from the prior year comparable quarter.  The payout ratio was 95% for the Quarter and was 99% in the comparative quarter last year.

The Company’s working capital reserve is $3.6 million at December 31, 2019, which is a decrease of $628,000 since December 31, 2018. During the fourth quarter, the reserve increased $240,000. With this reserve in place, the Company had targeted an annual payout ratio at or near 100% on an annualized basis. The reserve is available to stabilize dividends and fund other expenditures in the event of short- to medium-term variability in System Sales and, thus, the Company’s royalty income. In 2020, the Company will target an annual payout ratio at or near 100%.

As compared to basic EPS, the Company considers “adjusted” EPS[1] to be a more meaningful indicator of the Company’s operating performance and, therefore, presents fully-diluted, adjusted EPS. Adjusted EPS for the Quarter increased 3.1% to $0.234 and increased 0.9% to $0.885 per share for the year when compared to the same periods in 2018.

Of particular note is that the Company’s earnings from operations before income taxes, calculated under International Financial Reporting Standards (“IFRS”), can differ significantly from its taxable income, largely due to the tax amortization of the Pizza Pizza and Pizza 73 Rights and Marks, as well as the taxable income allocated to PPL. The amount of the tax amortization deducted is based on a declining basis and will decrease annually.

arrangements. Of the 30 nontraditional closures, 13 were operating in cinemas and six were in gas bars. Management anticipates returning to overall net positive store growth in 2020 at both brands.

When PPL reports closed restaurants, an amount reflecting the reduction in the Royalty resulting from the decrease in System Sales will be paid by PPL to the Partnership, monthly, (the “Make-Whole Payment”), commencing from the date of permanent closure of a restaurant and paid until the following Adjustment Date (January 1). On the subsequent Adjustment Date, the calculated lost System Sales from the closed restaurants will be offset against forecasted System Sales of the new restaurants added to the Royalty Pool. The details of the full calculation can be found in the Company’s Annual Information Form.

On June 28, 2019, the Partnership amended and extended its $47 million credit facility with a syndicate of chartered banks from April 2020 to April 2025.  The Partnership’s current interest rate is 2.75% and is projected to remain unchanged through April 2020 (2018 – 2.75%). The effective rate is comprised of a portion fixed with two interest rate swaps at 1.875% plus the credit spread, currently set at 0.875%. In the third quarter, the Partnership entered into a five year forward swap arrangement, commencing April 2020, at which time the credit facility will have a new, effective interest rate of 2.685% comprised of a fixed rate of 1.81% plus a credit spread, currently at 0.875%.

The following table sets out selected financial information and other data of the Company and should be read in conjunction with the consolidated financial statements of the Company. Readers should note that the 2019 results are not directly comparable to the 2018 results because of the fact that there are 772 restaurants in the 2019 Royalty Pool compared to 758 restaurants in the 2018 Royalty Pool. 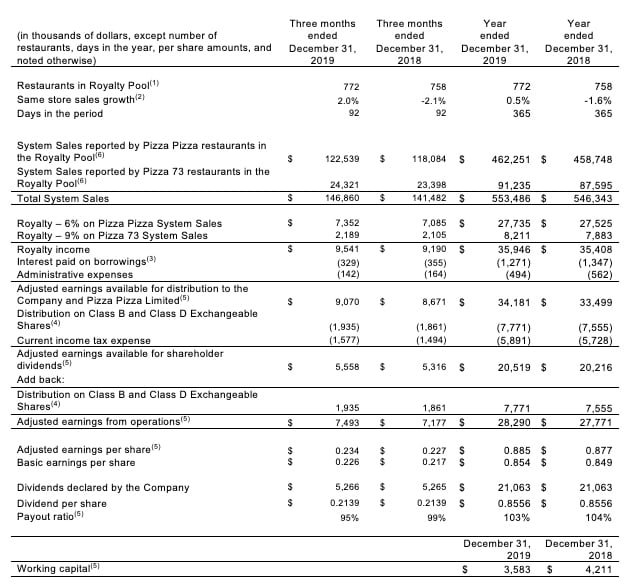 (2)  SSSG means the change in period gross sales of Pizza Pizza and Pizza 73 restaurants as compared to sales in the previous period, where the restaurants have been open at least 13 months.  Additionally, for a Pizza 73 restaurant whose restaurant territory was adjusted due to an additional restaurant, the sales used to derive the Step-Out Payment may be added to sales to arrive at SSSG. SSSG does not have any standardized meaning under IFRS. Therefore, these figures may not be comparable to similar figures presented by other companies. See “Reconciliation of Non-IFRS Measures” in the Company’s MD&A.

(4)    Represents the distribution to PPL from the Partnership on Class B and Class D Units of the Partnership. The Class B and D Units are exchangeable into common shares of the Company (“Shares”) based on the value of the Class B Exchange Multiplier and the Class D Exchange Multiplier at the time of exchange as defined in the License and Royalty Agreements, respectively, and represent 23.0% of the fully diluted Shares at December 31, 2019 (December 31, 2018 – 22.3%). During the quarter ended March 31, 2019, as a result of the final calculation of the equivalent Class B and Class D Share entitlements related to the January 1, 2018 Adjustment to the Royalty Pool, PPL was paid a distribution on additional equivalent Shares as if such Shares were outstanding as of January 1, 2018. Included in the three months ended March 31, 2019, is the payment of $31 in distributions to PPL pursuant to the true-up calculation (March 31, 2018 – PPL was paid $111).

(5)     “Adjusted earnings from operations”, “Adjusted earnings available for shareholder dividends”, “Adjusted earnings per Share”, “Payout Ratio”, “Working Capital” and “Interest paid on borrowings” do not have any standardized meaning under IFRS. Therefore, these figures may not be comparable to similar figures presented by other companies. See “Reconciliation of Non-IFRS Measures” in the Company’s MD&A.

(6)     System Sales (as defined in the Licence and Royalty Agreements) reported by Pizza Pizza and Pizza 73 restaurants include the gross sales of Pizza Pizza company-owned, jointly-controlled and franchised restaurants, excluding sales and goods and service tax or similar amounts levied by any governmental or administrative authority. System Sales do not represent the consolidated operating results of the Company but are used to calculate the royalties payable to the Partnership as presented above.

A copy of the Company’s consolidated financial statements and related MD&A will be available at www.sedar.com and www.pizzapizza.ca after the market closes on March 2, 2020.