Toronto, January 26, 2017 – Pizza Pizza Royalty Corp. (the “Company”) and Pizza Pizza Limited (“PPL”) today announced that effective January 1, 2017, the number of restaurants on which royalties are paid to the Company by PPL (the “Royalty Pool”) has been adjusted to include 27 new restaurants opened in 2016; 12 restaurants were closed and removed from the Royalty Pool.

In exchange for adding new restaurants to the Royalty Pool, PPL is compensated in equivalent Company shares (“Shares”) using an agreed-upon formula which is designed to be accretive to current shareholders.  Generally, when additional restaurants are added to the Royalty Pool, the forecasted increase to PPL’s System Sales (and thus, the Company’s royalty income) will result in an increase in PPL’s interest in the Company, reflected in an increase to the Class B and/or Class D Exchange Multipliers. Additional details about this formula can be found in Table 1 below and in the Company’s most recent Annual Information Form.

After the January 1, 2017 Adjustment Date, PPL now owns equivalent Shares representing 21.1% of the Company’s fully diluted shares (see Table 1 below). Prior to this adjustment, PPL’s ownership was 20.4%. PPL’s ownership is through its holdings of Class B and Class D units of the Partnership, which are exchangeable for a number of Shares based on the Class B and Class D Exchange Multipliers (the “equivalent Shares”).

As was the case on January 1, 2017, in calculating the Class D Exchange Multiplier, in any year that the Forecasted System Sales less closed restaurant sales and other adjustments is negative, no increase or decrease in the Exchange Multiplier is made. As a result, PPL’s Class D equivalent Shares are unchanged for 2017. The Forecasted Additional System Sales from the four new Pizza 73 restaurants are estimated at $1.2 million annually less $0.2 million in System Sales attributable to the four closed Pizza 73 restaurants resulting in net estimated Pizza 73 sales of $1.0 million added to the Royalty Pool. The net estimated sales were further reduced by $2.1 million in System Sales attributable to certain restaurants previously added to the Royalty Pool whose territory adjusted a previously existing restaurant, resulting in a negative Pizza 73 Estimated Determined Amount. As a result, PPL’s Class D equivalent Shares is unchanged for 2017. PPL will only have additional Class D equivalent Shares for 2017 if the actual sales performance of the four new Pizza 73 restaurants, less the sales of closed and adjusted restaurants, is positive when actual sales performance is known with certainty in early 2018.

Table 1 – Summary of the Company’s Outstanding and Fully-Diluted Shares, including an analysis before and after the 20% entitlement holdback: 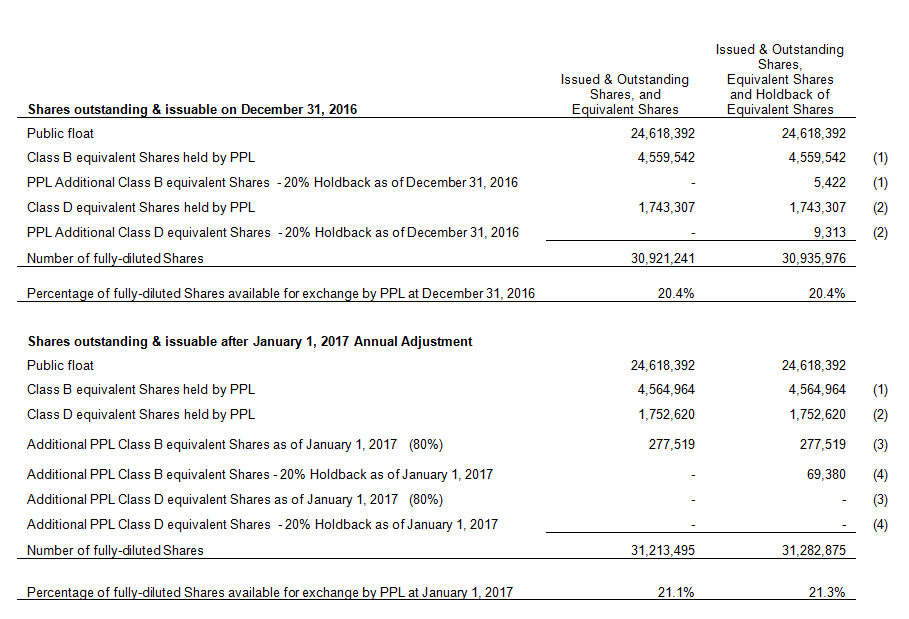 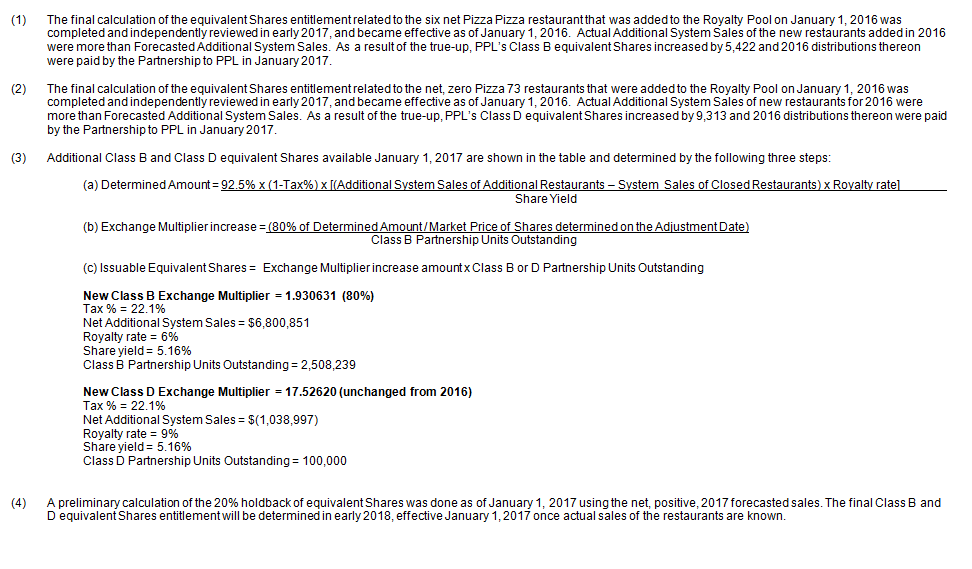 Certain statements in this press release, including those concerning forecasted sales performance of new restaurants and related adjustments to the Exchange Multipliers, may constitute “forward-looking” statements, which involve known and unknown risks, uncertainties and other factors that may cause the actual results, performance or achievements to be materially different from any future results, performance or achievements expressed or implied by such forward-looking statements.

When used in this press release, such statements include such words as “may”, “will”, “expect”, “believe”, “plan”, and other similar terminology in conjunction with a discussion of future operating or financial performance.  These statements reflect management’s current expectations regarding future events and operating performance of the restaurants added to the Royalty Pool and speak only as of the date of this press release. Material factors or assumptions reflected in the presentation of Forecasted Additional System Sales include: demographic and competitive studies, historical sales performance of similar stores and economic forecasts for the retail industry.  These forward-looking statements involve a number of risks and uncertainties. The following are some factors that could affect the forecasted performance of these restaurants, causing actual results to differ materially from those expressed in or underlying such forward-looking statements: competition, the store owner’s performance, changes in demographic trends, changing consumer preferences and discretionary spending patterns, changes in national and local business and economic conditions, and legislation and governmental regulation. These factors could also affect PPL’s ability to develop new restaurants. The foregoing list of factors is not exhaustive and should be considered in conjunction with the other risks and uncertainties described in the Company’s most recent Annual Information Form. The Company assumes no obligation to update these forward-looking statements, except as required by applicable securities laws.