Total Royalty Pool System Sales for the Quarter and year decreased over the comparative periods as a result of the reported decrease in same store sales growth (“SSSG”), offset by the impact of new restaurants added to the Royalty Pool on January 1, 2018.

SSSG, the key driver of yield growth for shareholders of the Company, decreased by 2.1% for the quarter compared to the same quarter last year, and decreased 1.6% for the year compared to 2017.

SSSG is driven by the change in the customer check and customer traffic, both of which are affected by changes in pricing and sales mix. During the Quarter and year, the average customer check increased, when the two brands are combined, while the customer traffic count decreased. The average customer check increased as a result of increasing retail prices, early in 2018, to partially offset provincial minimum wage increases. The price increases resulted in softness in traffic counts compared to 2017. Management continues to adjust retail pricing strategies designed to increase traffic, in what continues to be a highly competitive, value-oriented retail environment.

Paul Goddard, CEO, Pizza Pizza Limited said, “While disappointed with our overall fourth quarter sales results, we were encouraged to see our Alberta brand, Pizza 73, report positive sales growth this quarter. However, at Pizza Pizza, our marketing campaigns designed to drive sales did not resonate sufficiently with consumers, many of whom continue to demand deep value offerings in this highly competitive market.  We will continue to refine our efforts to drive traffic and in turn topline sales for 2019.”

In the Quarter, the Company declared shareholder dividends of $5.3 million, or $0.2139 per Share, which is unchanged from the prior year comparable quarter.  The payout ratio was 99% for the Quarter and was 95% in the comparative quarter last year.

The year-to-date decrease in the reserve is attributable to the reported negative SSSG, as well as a 2017 true-up payment to Pizza Pizza Limited (“PPL”) of $111,000 made in relation to the January 1, 2018 Adjustment Date. With this reserve in place, the Company will continue to target an annual payout ratio at or near 100% on an annualized basis.

Fully-diluted basic EPS decreased 2.3% to $0.217 for the Quarter and decreased 2.1% to $0.849 for the year when compared to the prior year periods. EPS decreased due to a decrease in royalty income and an increase in PPL’s Equivalent Shares on the January 1, 2018 Adjustment Date.

As compared to basic EPS, the Company considers “adjusted” EPS[1] to be a more meaningful indicator of the Company’s operating performance and, therefore, presents fully-diluted, adjusted EPS. Adjusted EPS for the Quarter decreased 2.6% to $0.227 and decreased 1.9% to $0.877 per share for the year when compared to the same periods in 2017.

Current income tax expense for the Quarter and year was relatively consistent with the 2017 comparable periods at $1.5 million and $5.7 million, respectively.

Of particular note is that the Company’s earnings from operations before income taxes, calculated under International Financial Reporting Standards (“IFRS”), can differ significantly from its taxable income, largely due to the tax amortization of the Pizza Pizza and Pizza 73 Rights and Marks. The amount of the tax amortization deducted is based on a declining basis and will decrease annually.

The following table sets out selected financial information and other data of the Company and should be read in conjunction with the consolidated financial statements of the Company. Readers should note that the 2018 results are not directly comparable to the 2017 results because of the fact that there are 758 restaurants in the 2018 Royalty Pool compared to 751 restaurants in the 2017 Royalty Pool. 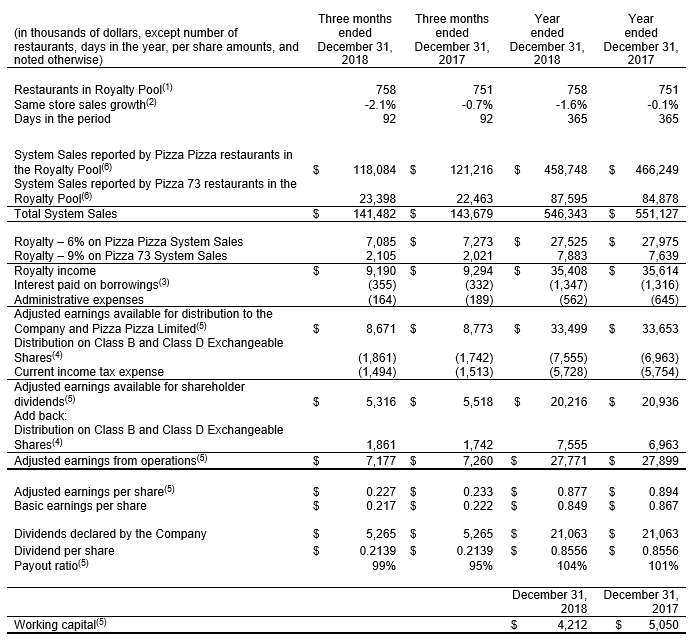 A copy of the Company’s consolidated financial statements and related MD&A will be available at www.sedar.com and www.pizzapizza.ca after the market closes on March 1, 2019.